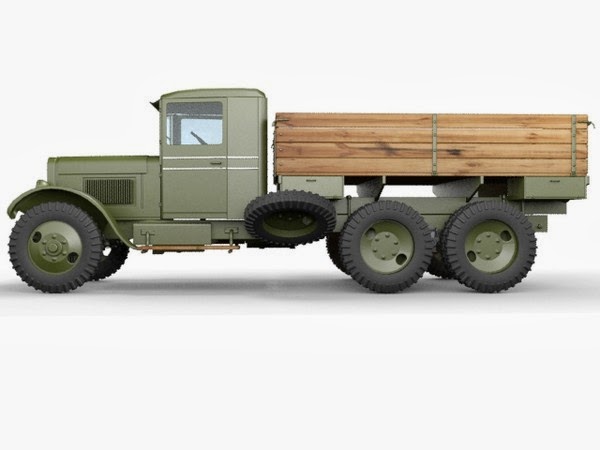 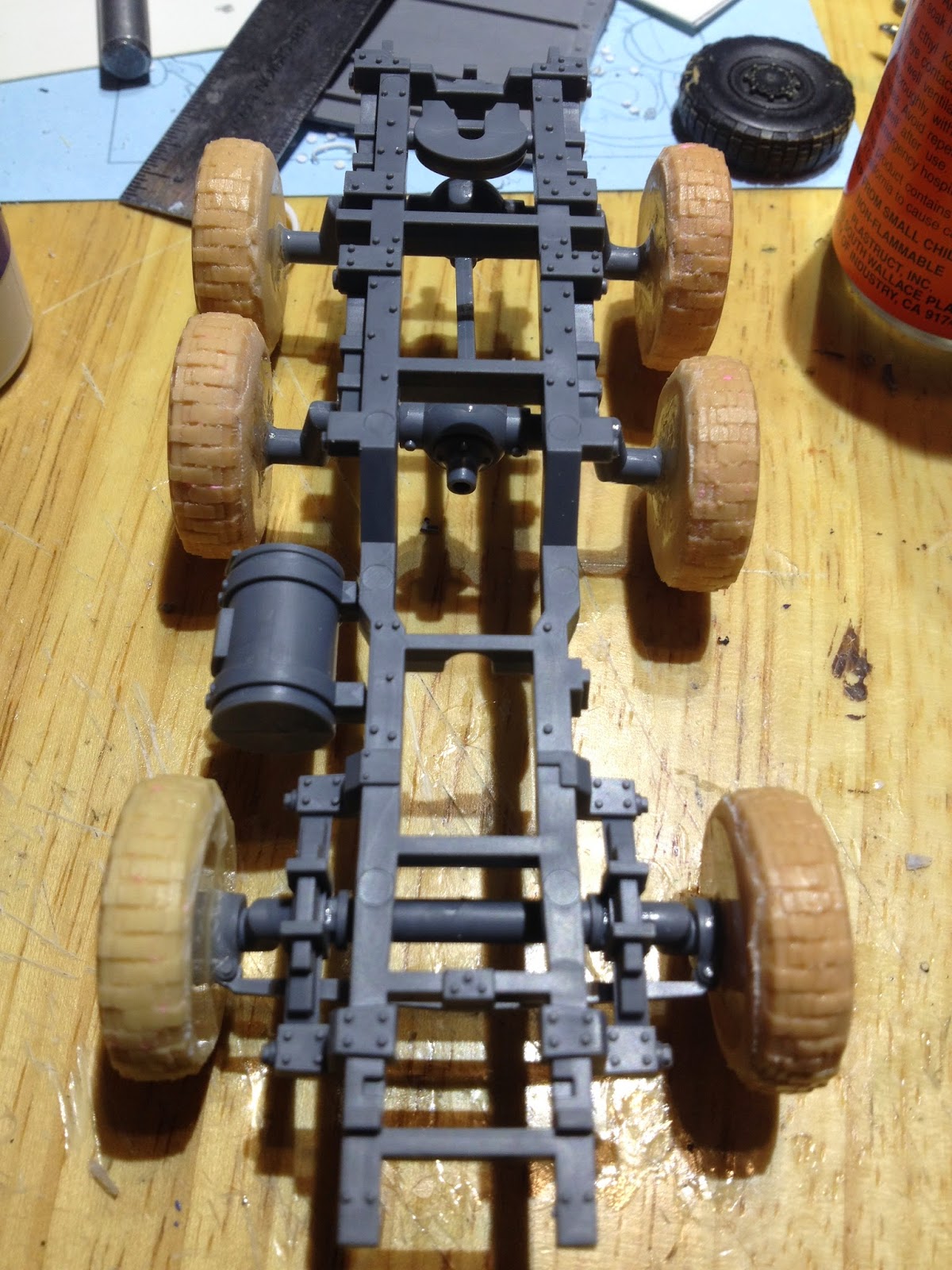 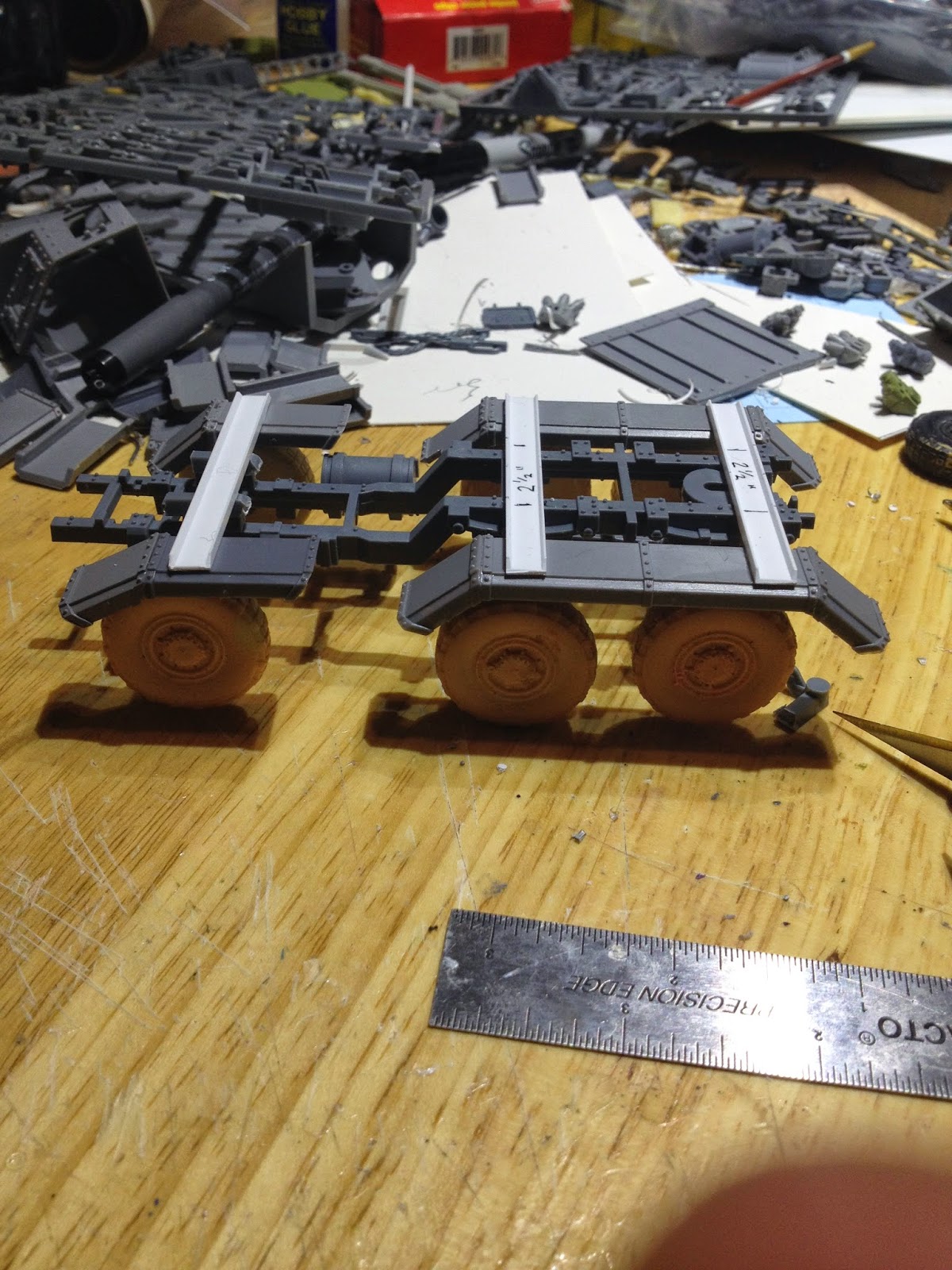 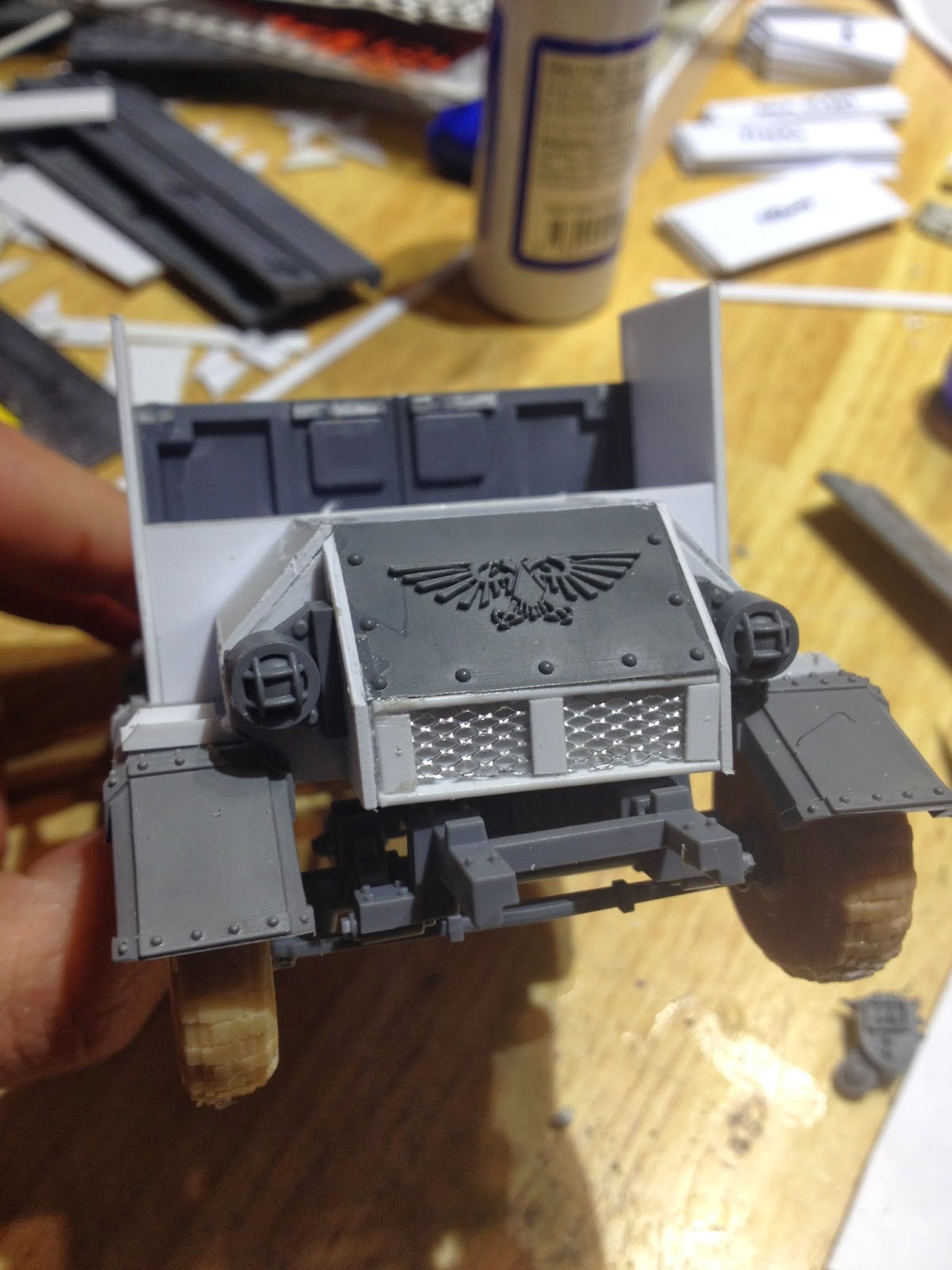 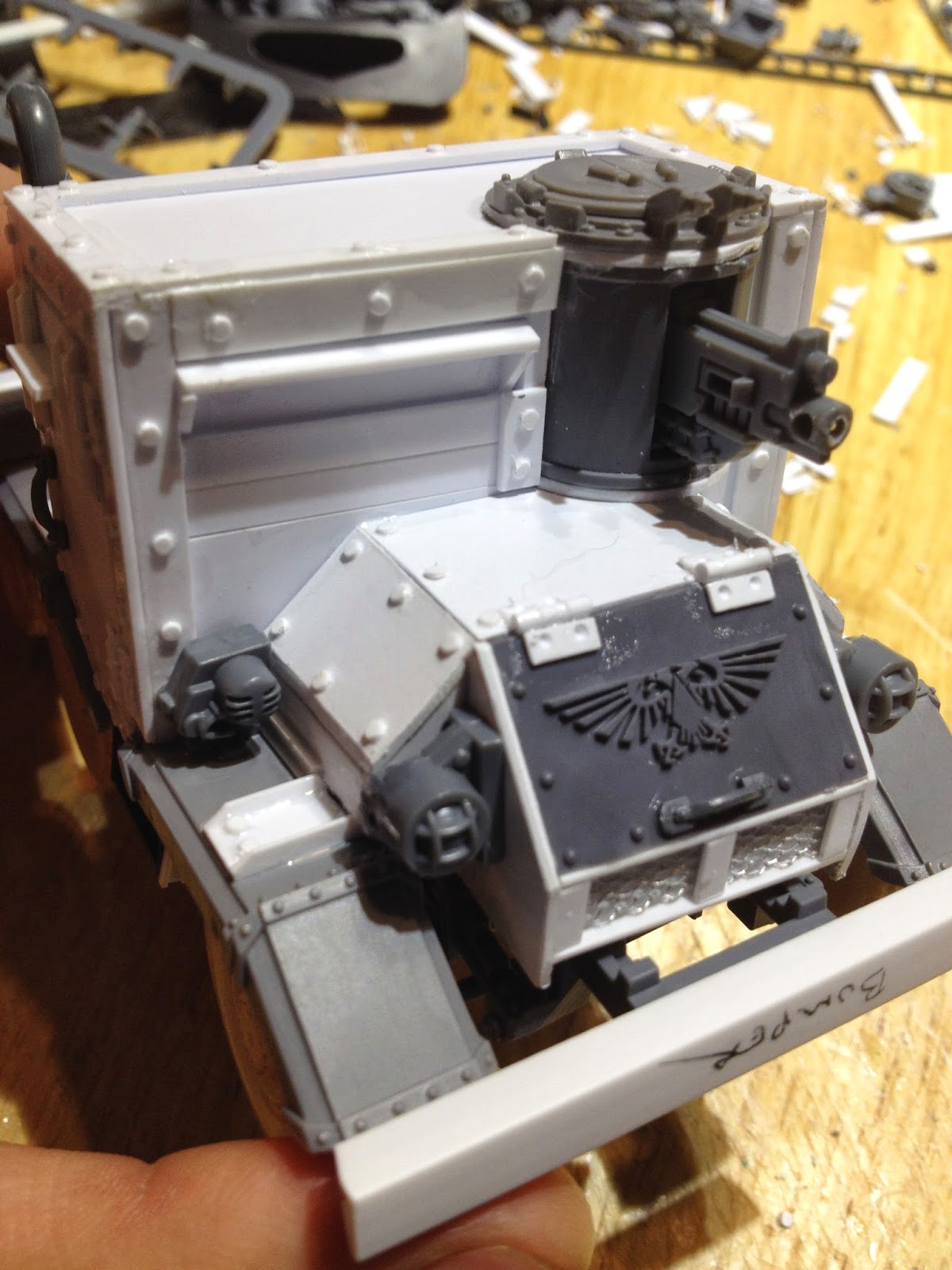 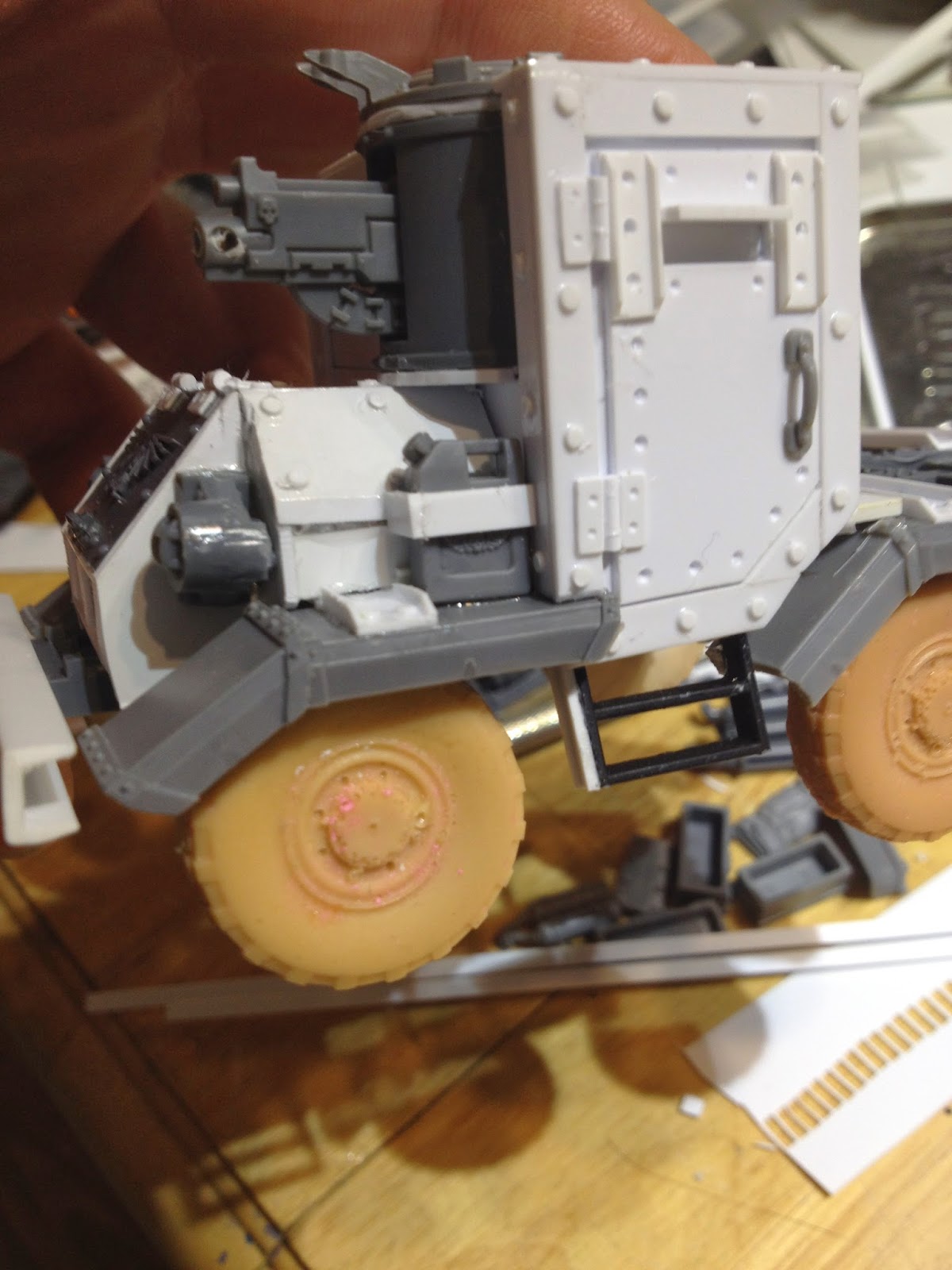 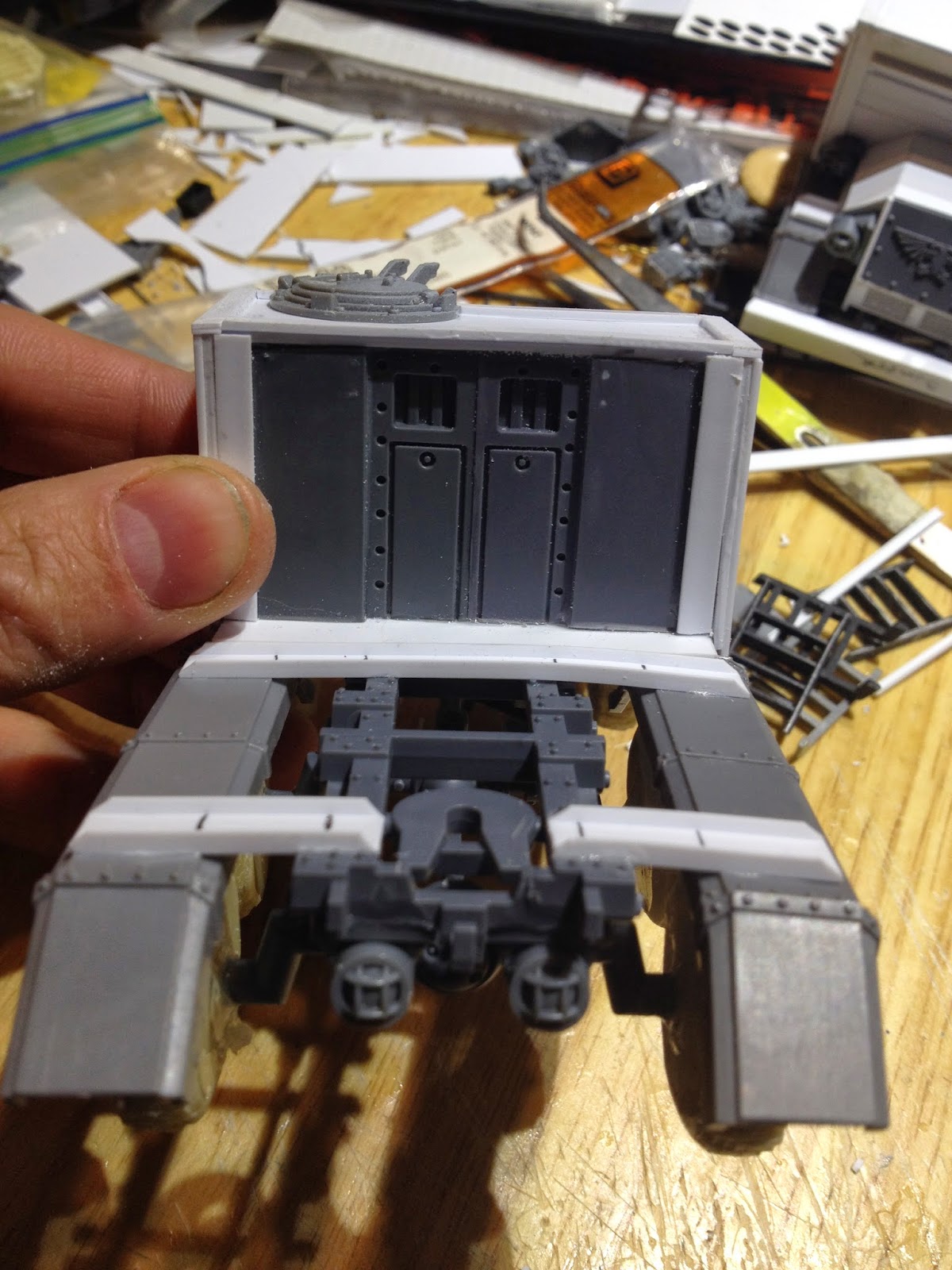 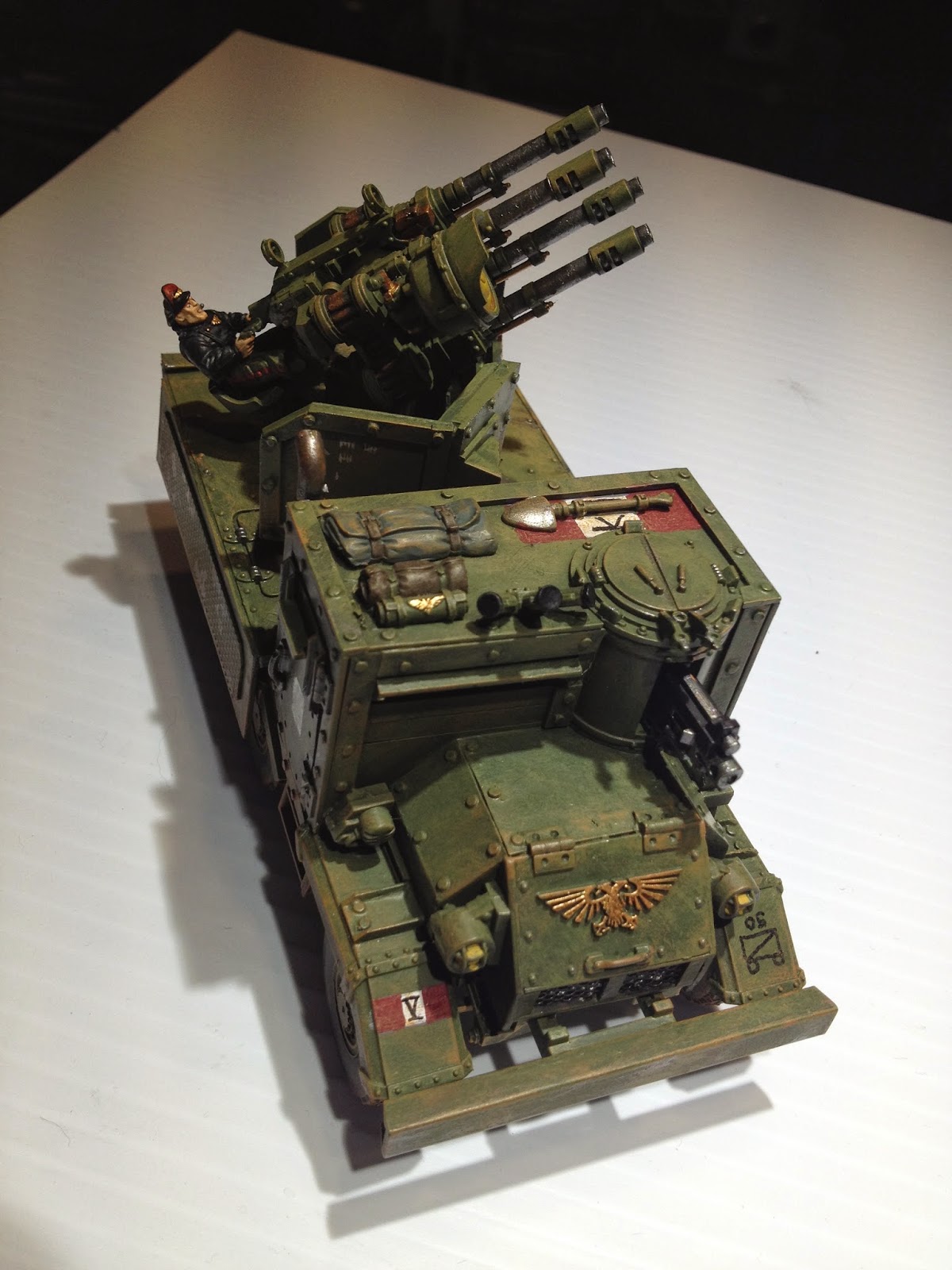 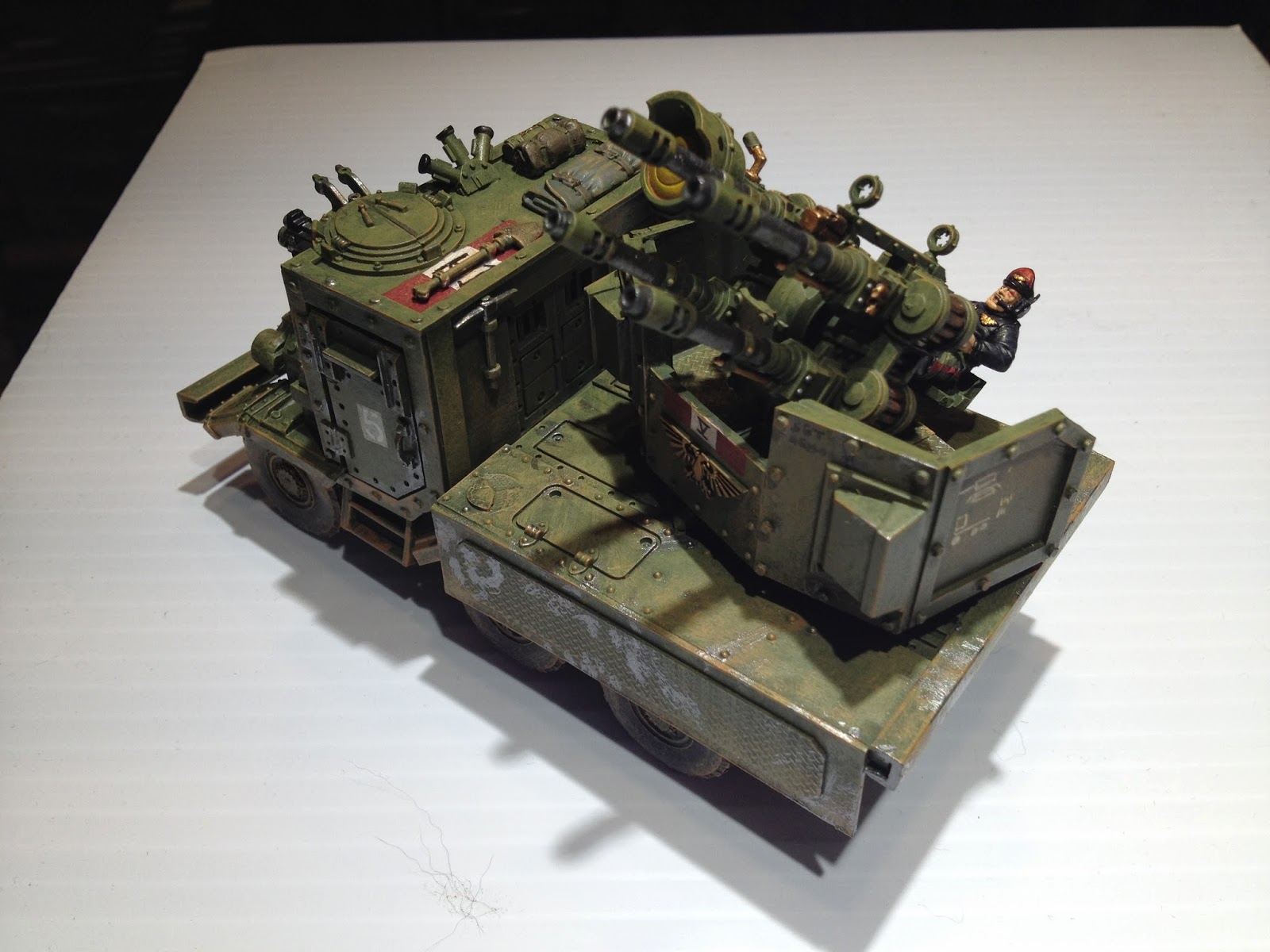 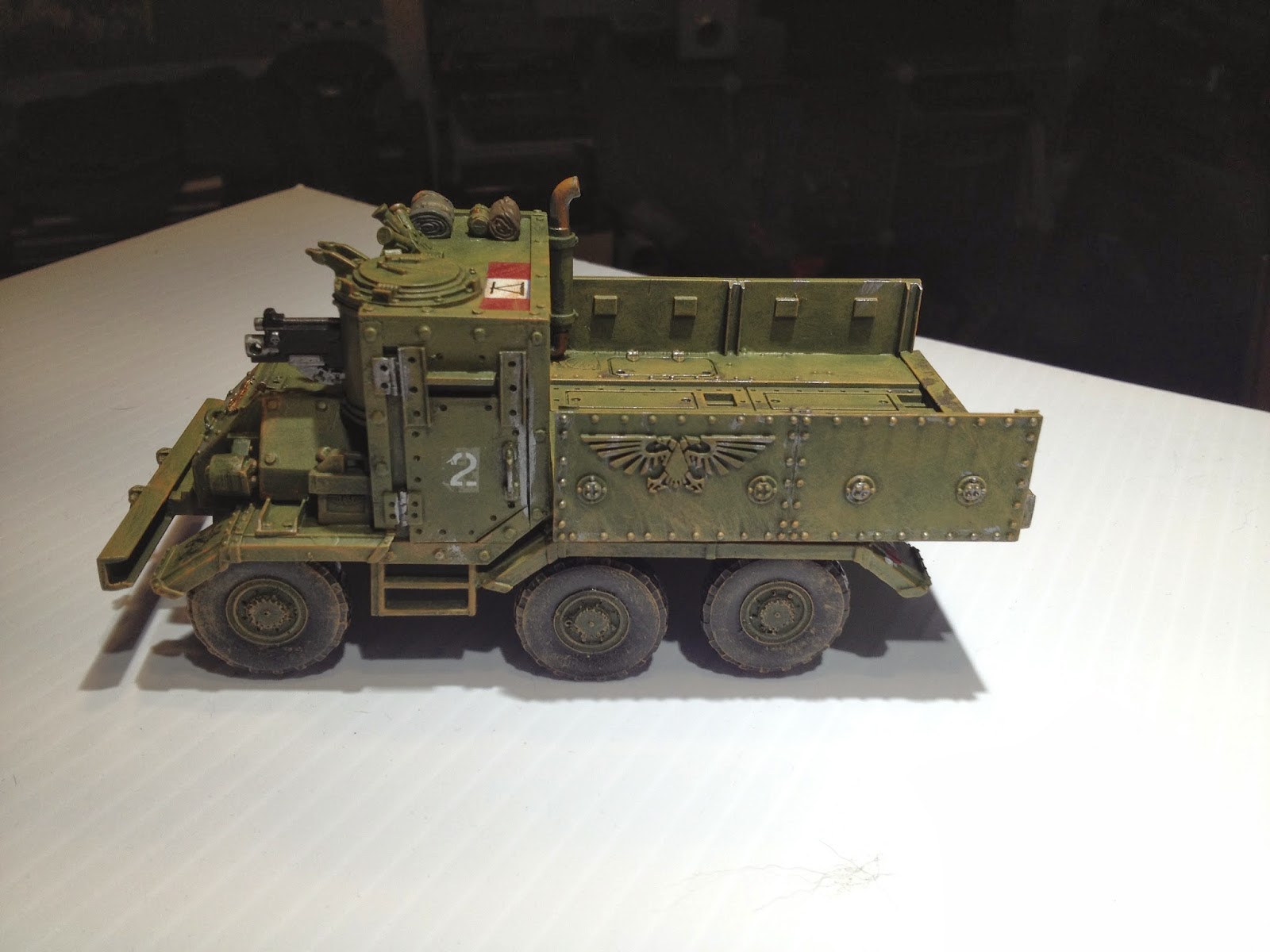 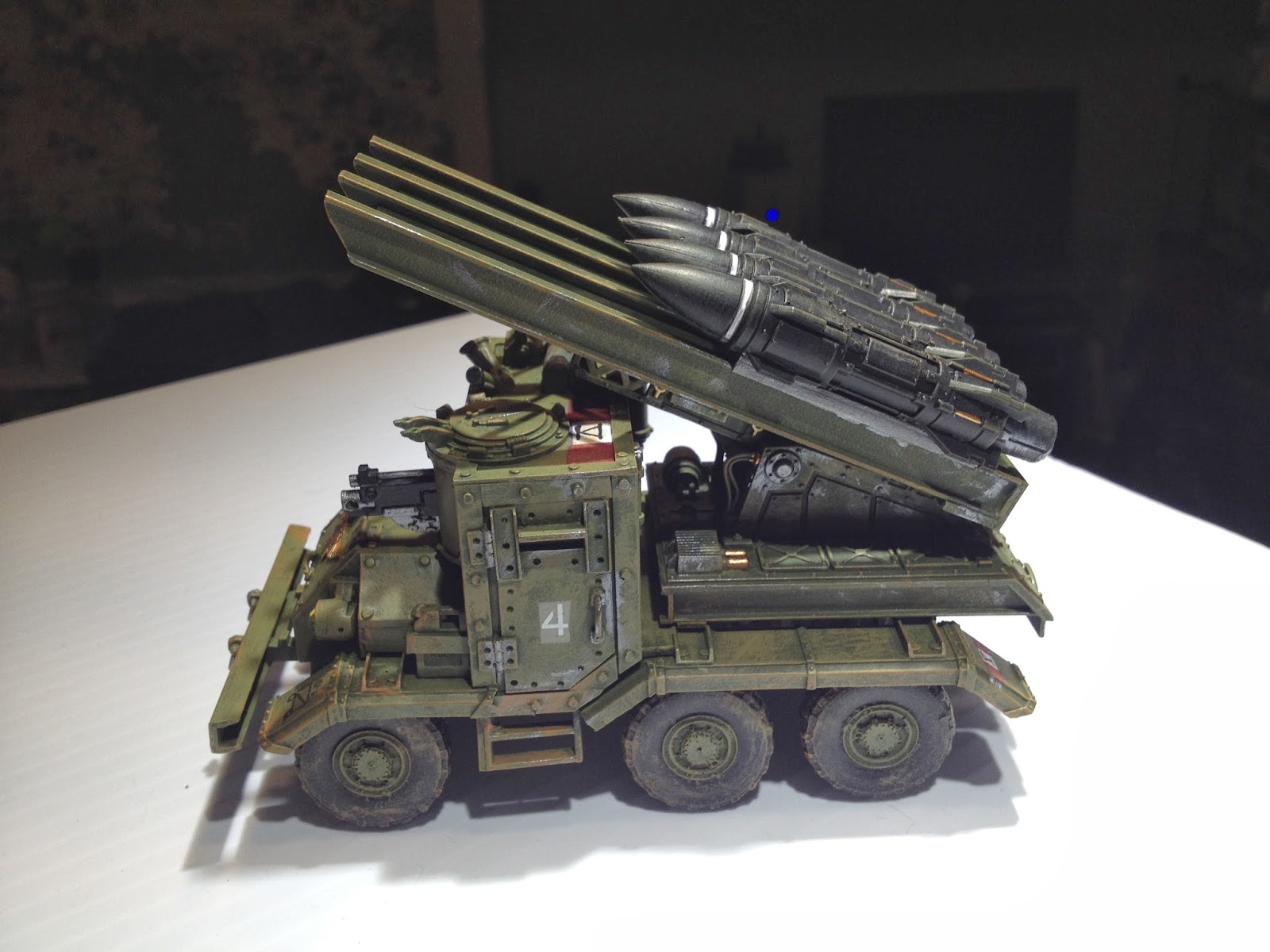 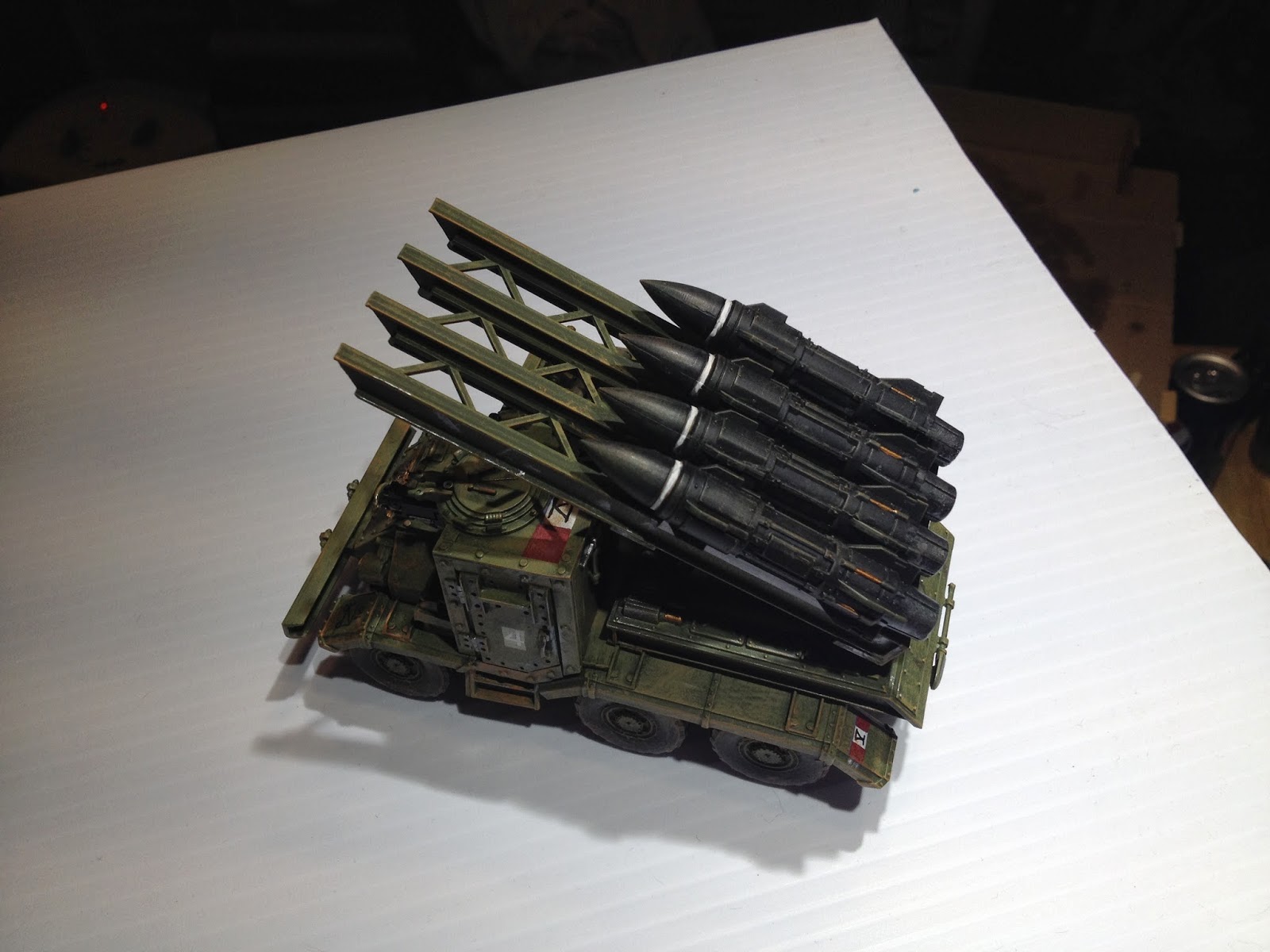 More on my Hellhound variants

Among all of the craziness that was shown in my last post about Chimeras, I wanted to now share a bit of the variants to represent my Bane Wolf and Devil Dogs. (I had put up a post of the Hellhounds quite some time ago.)

Here is the current GW version The nozzle is a little odd, but since workshop decided that was the design, I would take it as a nice suggestion and we could go on from there.

Now if you are not familiar with the Bane wold for the Imperial Guard (at least until the codex is renamed), it is to be well respected. This little honey can melt anyone with its caustic chemical sprayer. Seriously 2+ poisoned template attack. (at least until the new codex is out in April '14)

SO from that template I went forth to create something that would fit in with the theme of my army... 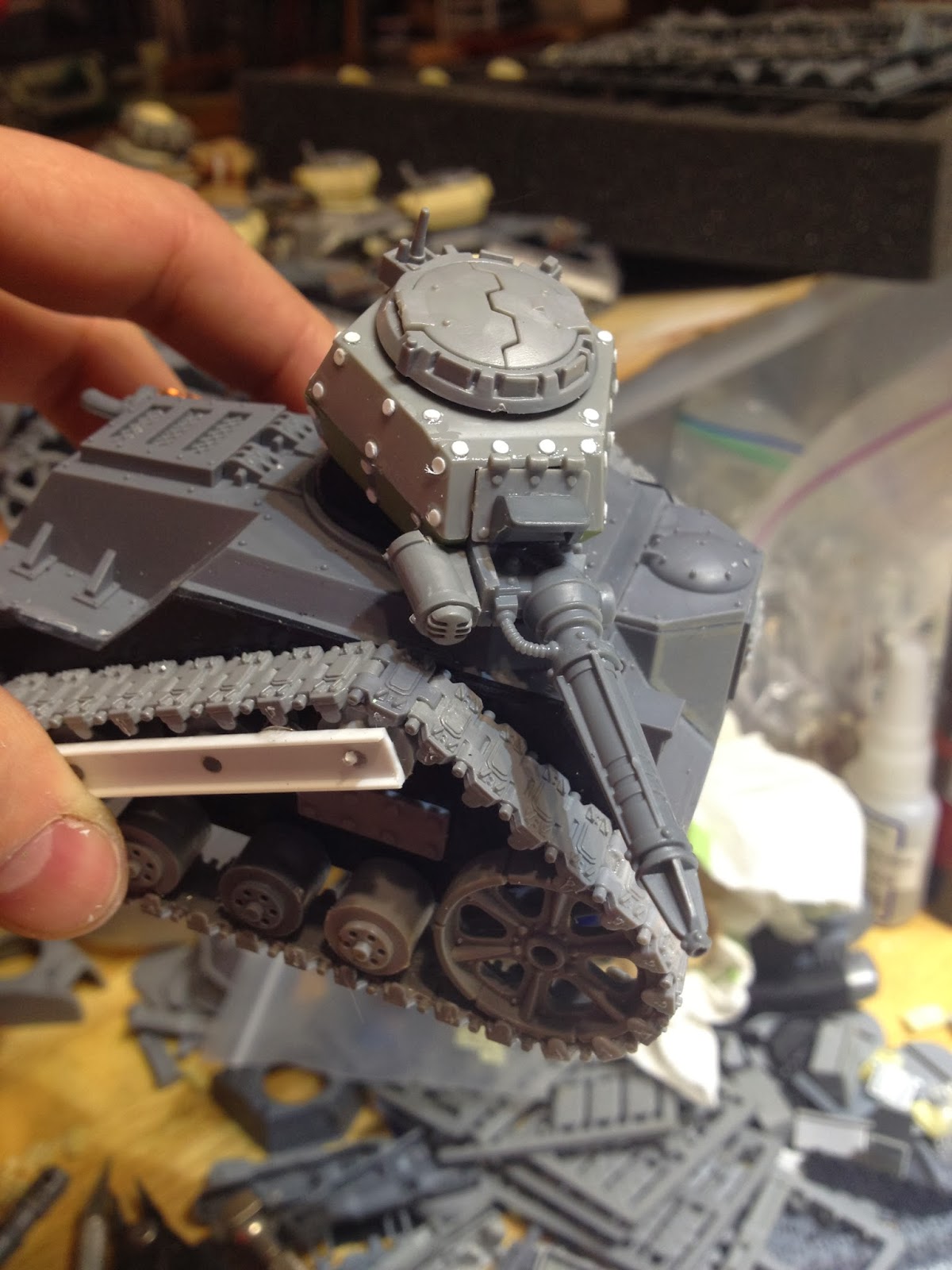 The first consideration was in creating something that resembled the GW design but with my own flair.

The nozzle was fashioned out of the Imperial comms relay you get in the Imperial bastion. its two different parts to create the barrel. If you look at the GW sprues you can figure it out.

I added a heavy fluid pump (right side of the barrel towards the back) This was made from an extra hydrolic piston from the newer IG dozer blade. I added a small vent on the front of it. This vent was shaved off of a Space Marine searchlight.

All told I was very happy with the look and like it more that the design GW produced, but that is aesthetics. What GW designers like and what I like may diverge from time to time, but rest assured I will use the designs I like. =)

I produced two of these turrets so I could have the option of fielding both in a battle line. And the Emperor's mercy will be delivered to the enemy. 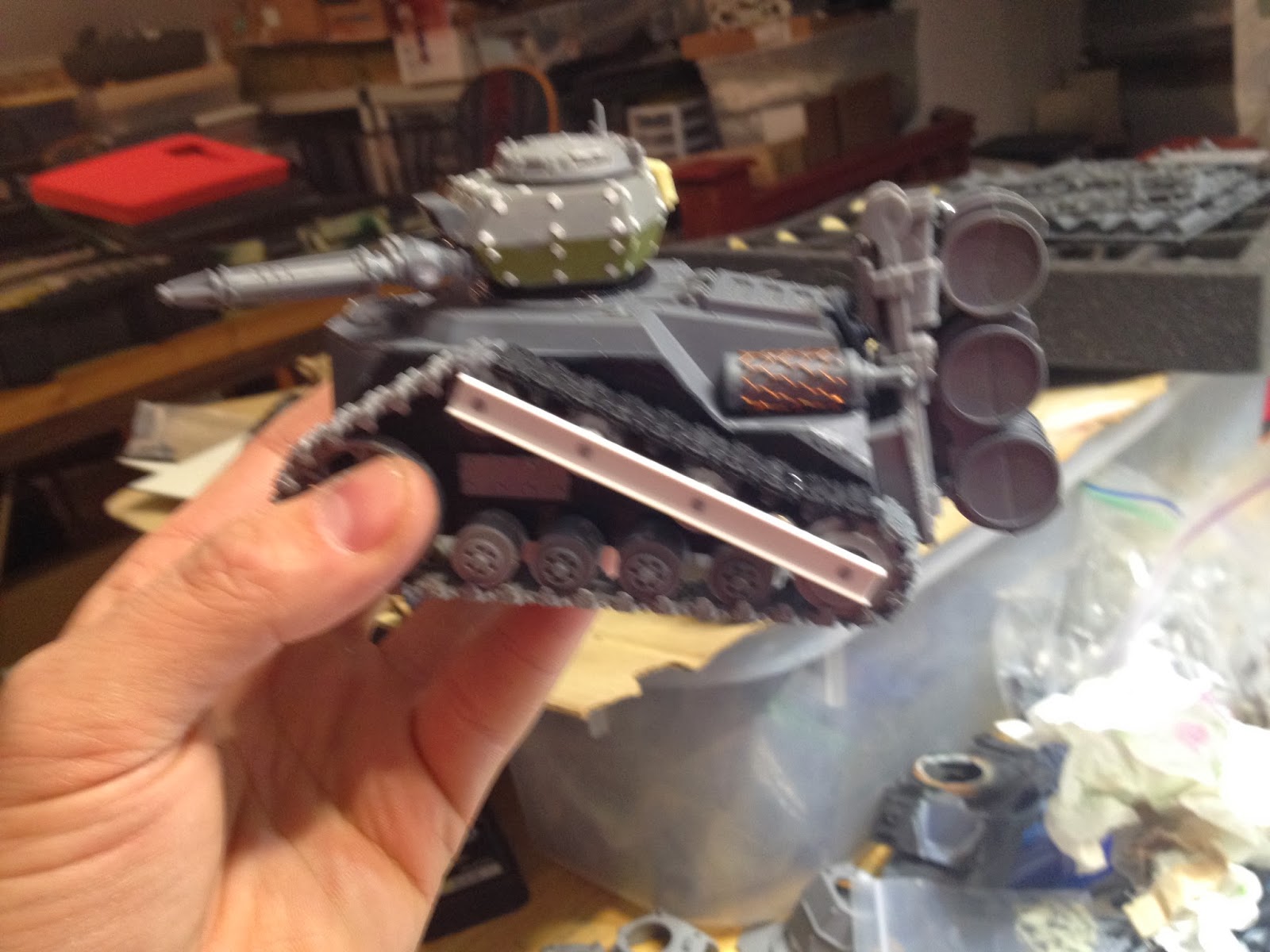 I created two chemical storage racks for the Bane wolves as well. These, like my Hell hound carriages, are magnetized and can be removed if I want to use the chassis for another type of vehicle.

The design is created from extra fuel storage tanks off of a Baneblade accessory sprue with an extra fuel tank added to the stack. Another part of the newer IG dozer blade and a few boxes helped flush out the look of the piece. Who knows. I may have to make more!

The Devil Dog was the next turret I fashioned. I only made one of these as I am not a big fan of them at this time, but they have their uses. The basic design was the creation of a Heavy Multi-melta. 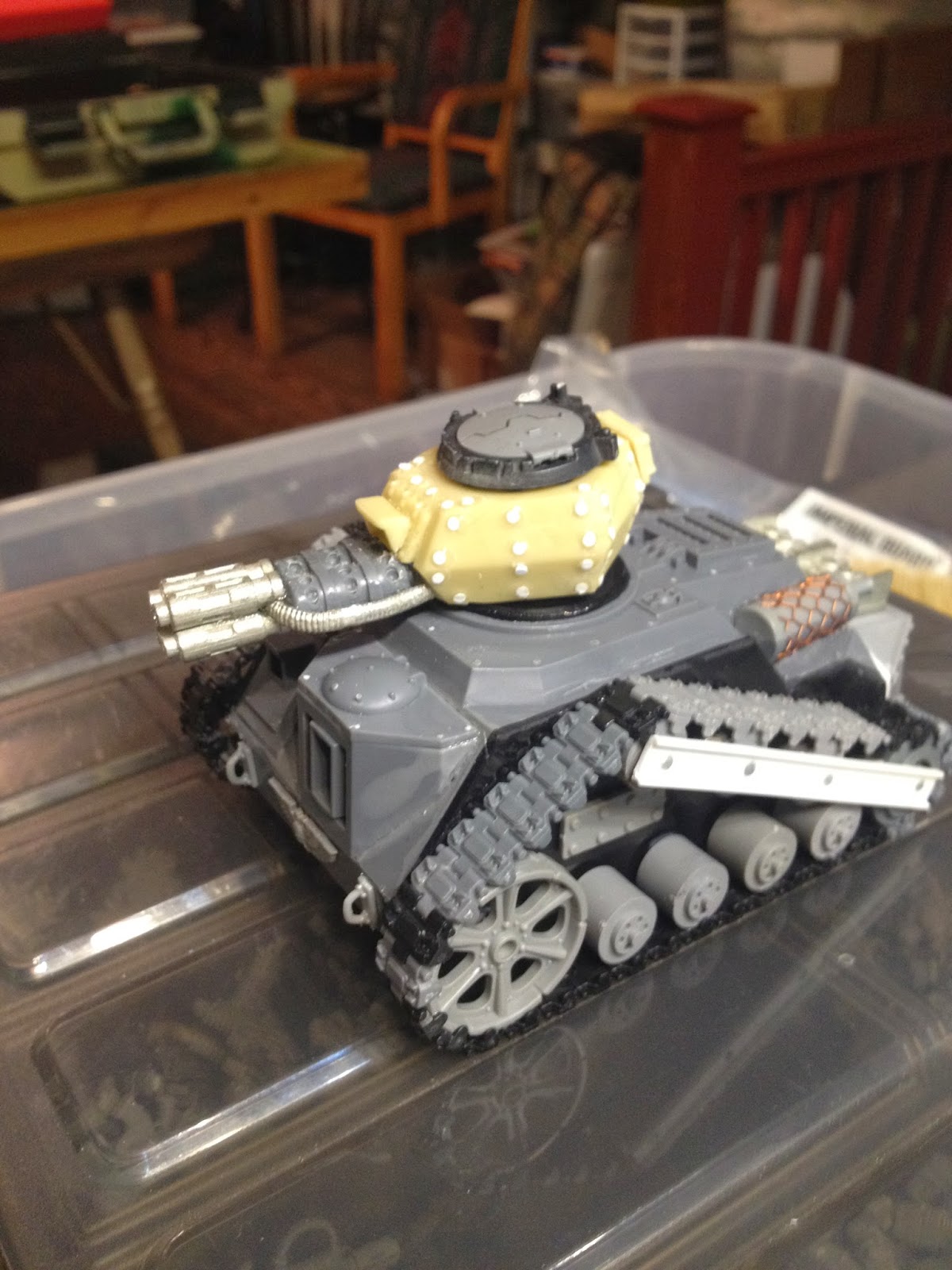 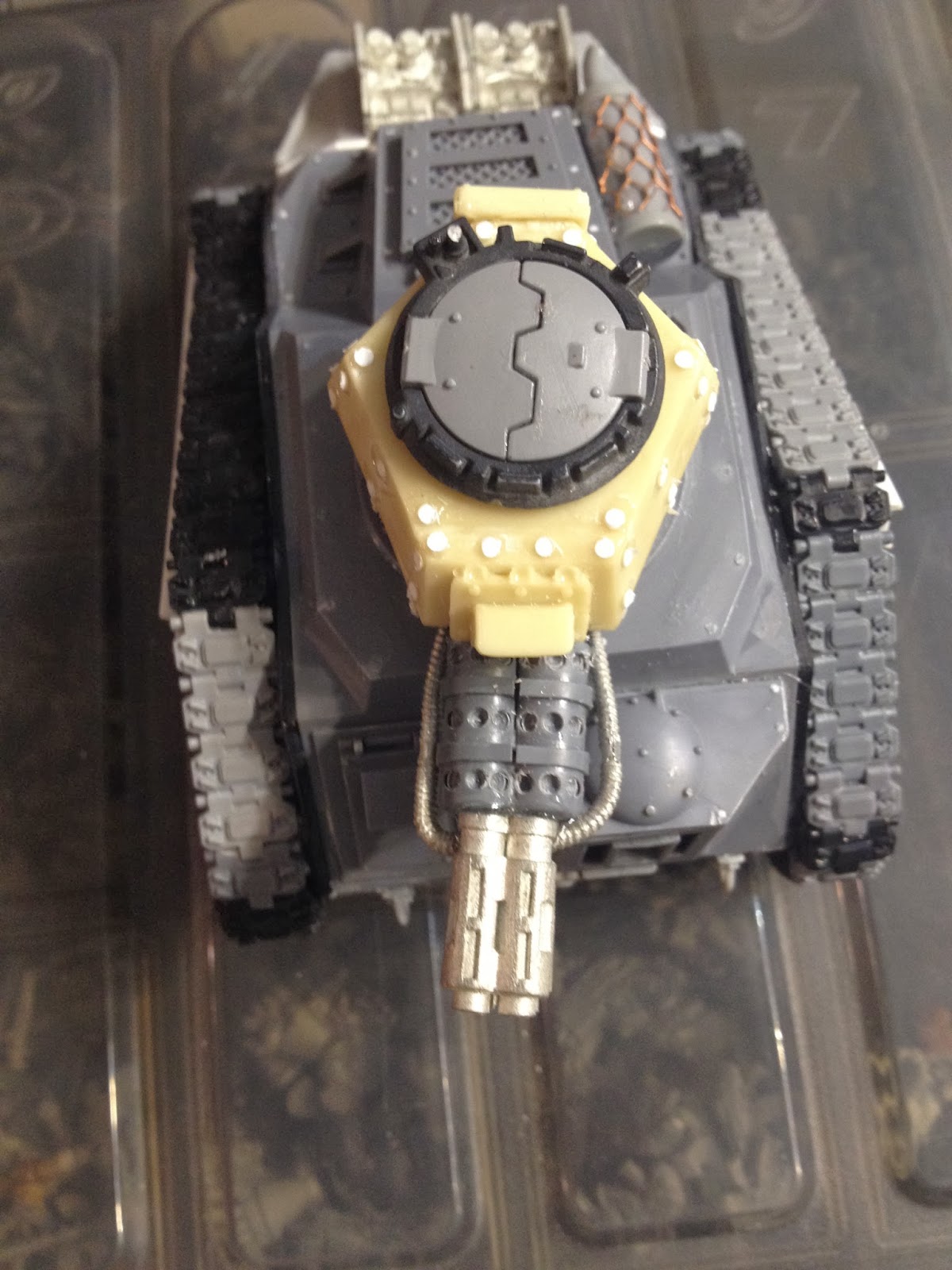 The barrels were created from the exhausts of a new Leman Russ Demolisher kit. The extra vents and cowling help illustrate the additional heat generated from a multi-melta that generates a blast template.

The barrel tips were two of the old GW pewter multi-meltas that came in the old demolisher kits when they used to have packs of metal pieces included with a basic Leman Russ kit.

I used two of the multi-melta barrels in an over-under fashion. Additional coolant tubing was added from an old cabling kit that GW used to sell as bits.

Dave taylor has a great article on making tubing out of green stuff on his blog (check it out here!) GUitar string can work really well also. 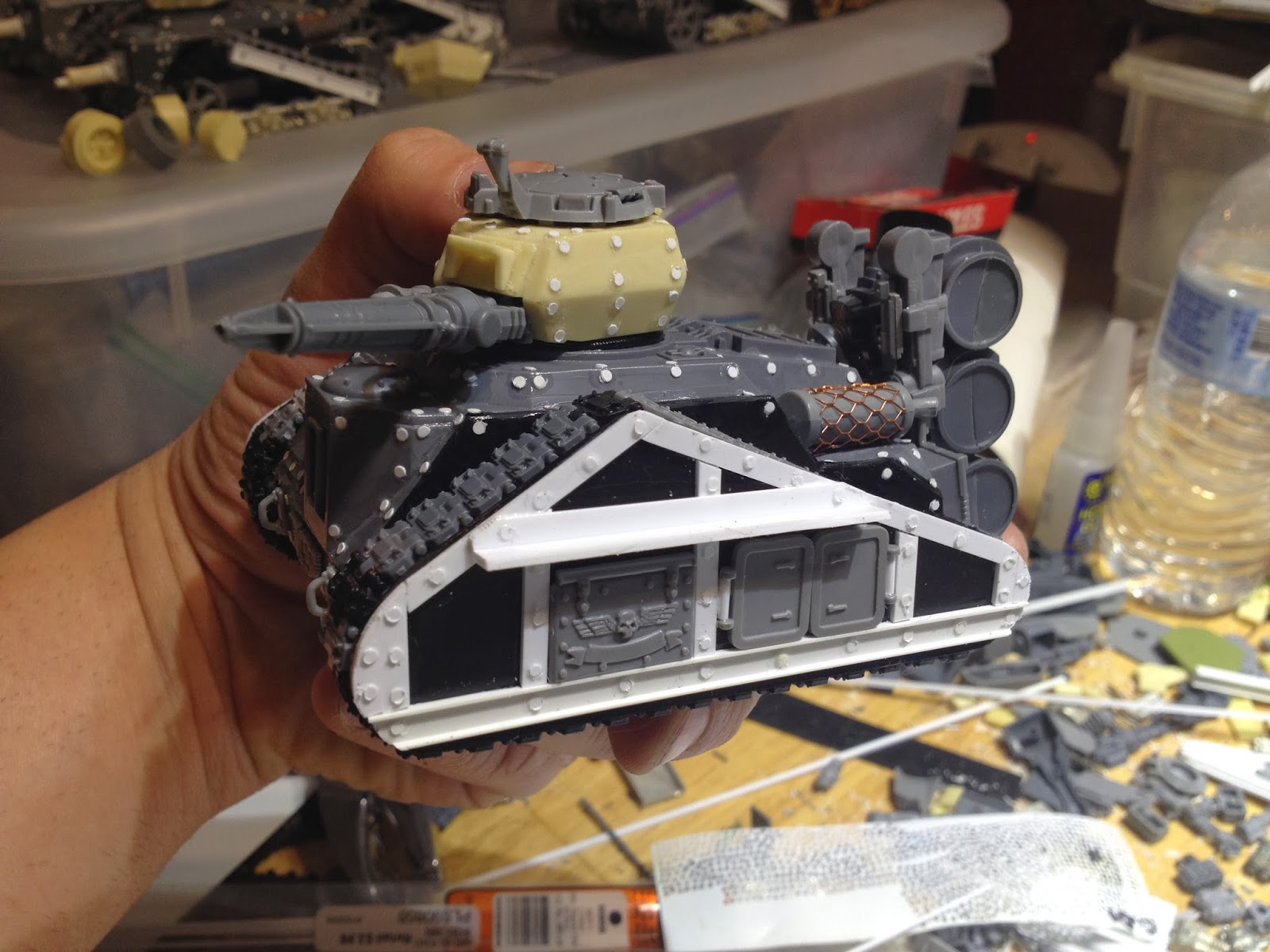 I only made one of these. Depending on the IG (AM) codex could change this or rules in the new (Not 7th edition) of the WH40K rules could change how vehicles work and damage is done. I could make more of them. The casement on the back is also magnetized. Extra storage for the melta cells.

The sides of my Hell Hound / Bane Wolf / Devil dogs have heavier armor on the sides than your average Chimera hull. So, to show this I decided to create extra armor sides. 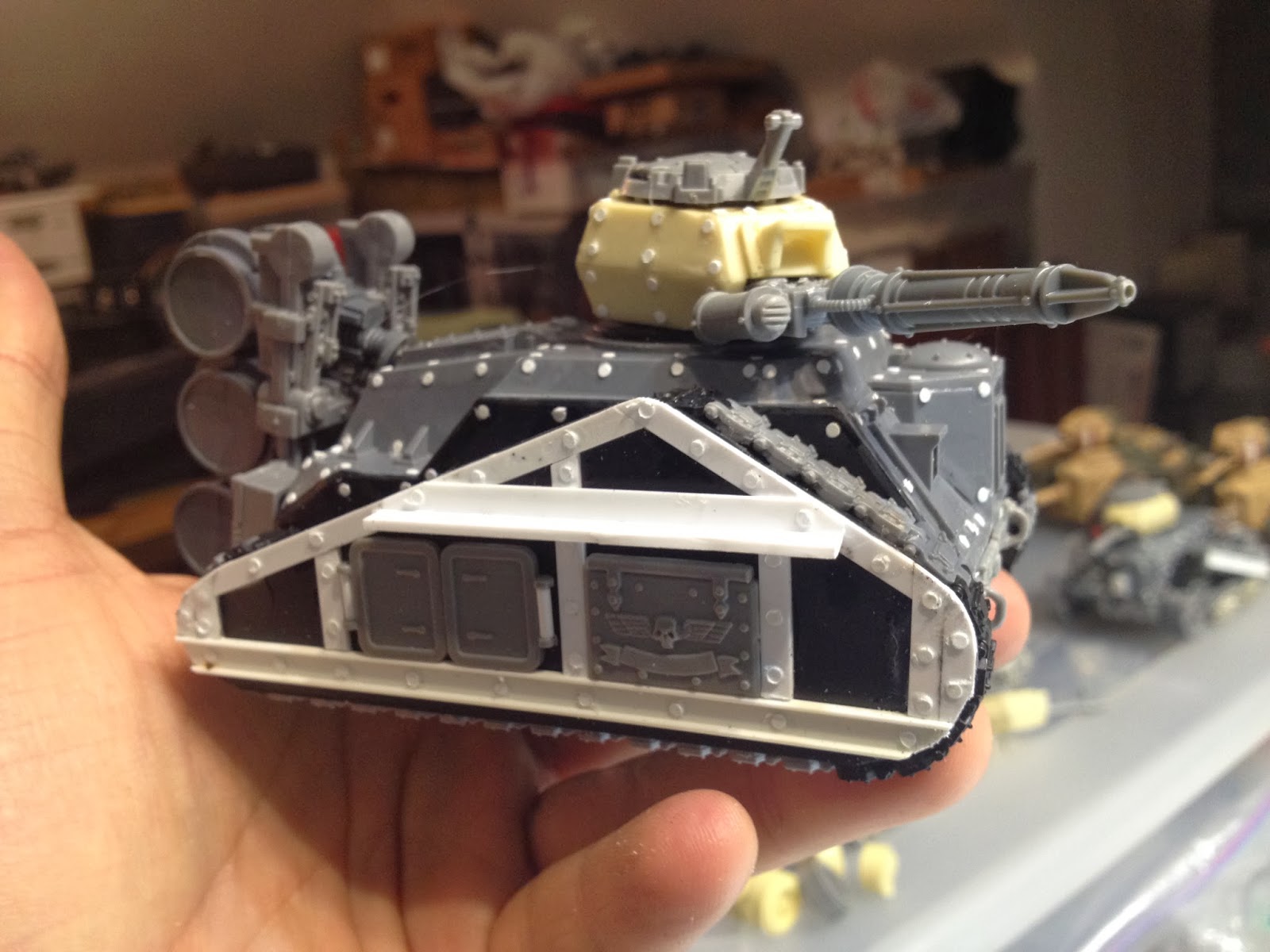 The additional armored skirts were attached permanently to 4 hulls of the 13 Chimeras I made. I figure when I go to battle, the most I will ever truly need on the table top is four.

Should I need more, I hope I have the fortitude to make the additional pieces, but I have bigger problems at that point.

All told I am very happy with the look of the variants and of the Chimera "light tanks" as a whole.

I have been working on several projects over the last few months and I wanted to share with you what I had been working on. A while ago I had a few articles concerning my chimera variations from the normal GW model. If you would like to see that article, you may go here or you are welcome to scroll back and check out the article that way.

SO I got on this build it or sell it kick recently and decided to build everything that I can out of my Bitz Boxes and found out I could be rather productive. 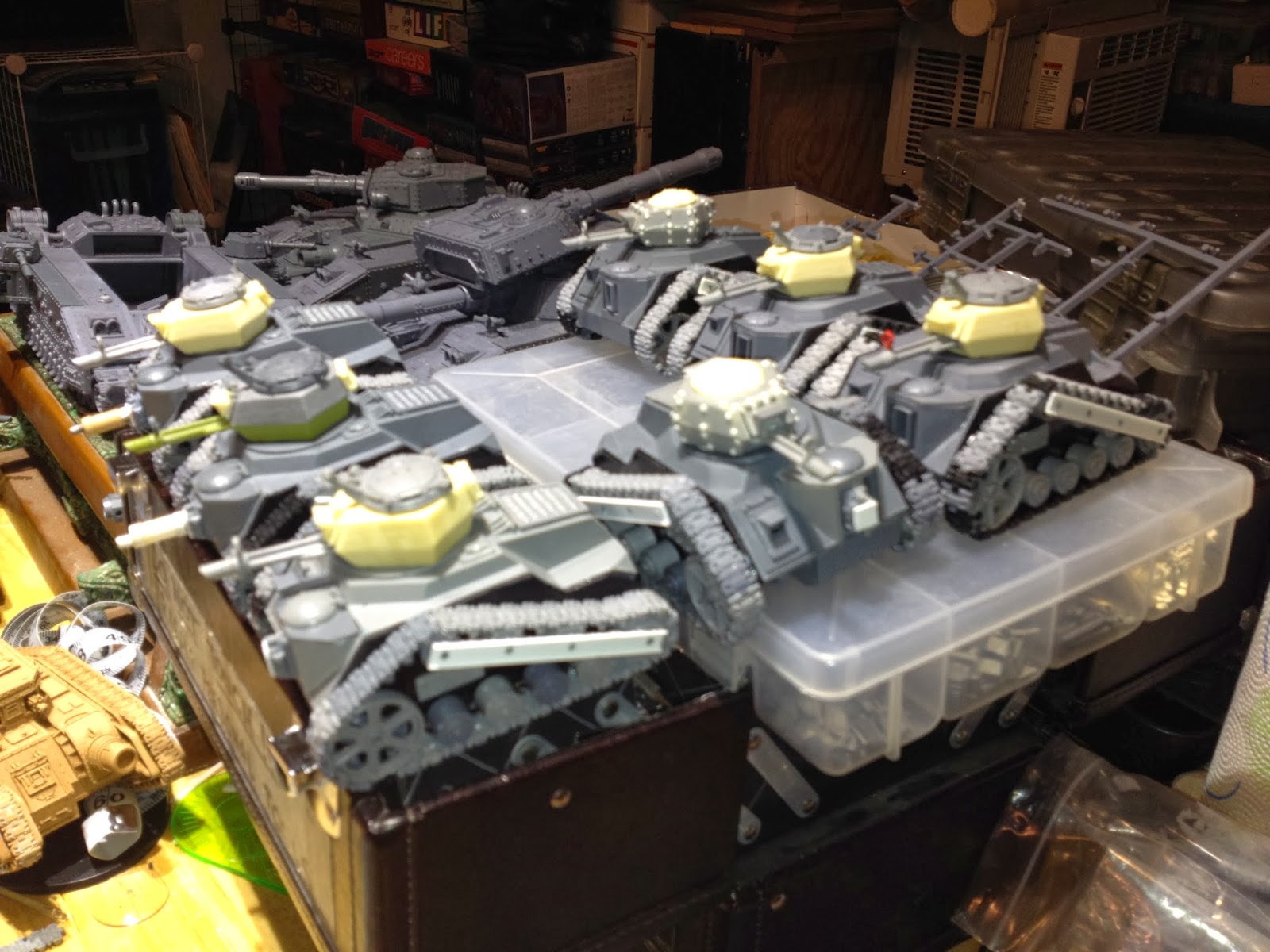 I was able to manage another 10 hulls.

I also made a total of 5 "heavier" chimera chassis that would be used for my Hellhound / Bane Wolf / and Devil Dog bodies. 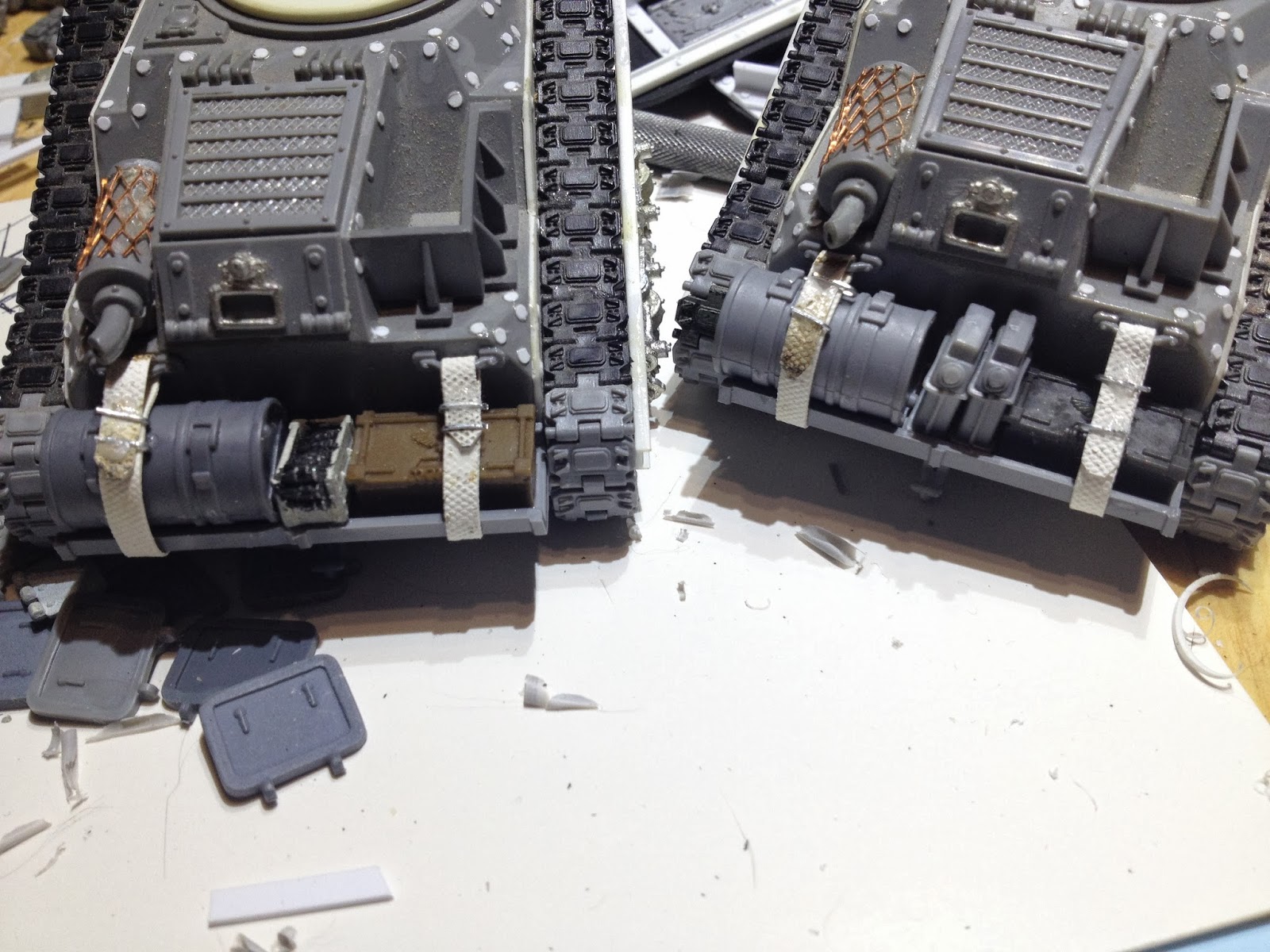 You will notice that the turrets have a yellowish color as they were created and cast out
I will be showing them off in a future blog post. I will be trying to make more posts with a far greater frequency as well.

Here is a close up of the stowage on the back of the vehicle. I really feel the details make the models.

All in all it took about 2 weeks for me to sort through the bins and see what could be made and what types of chassis I wanted to create.

Shortly after completing all of the builds I spent one full weekend bringing everything together for painting. I still have the final stowage to paint, but I love the look and I am very happy with it. 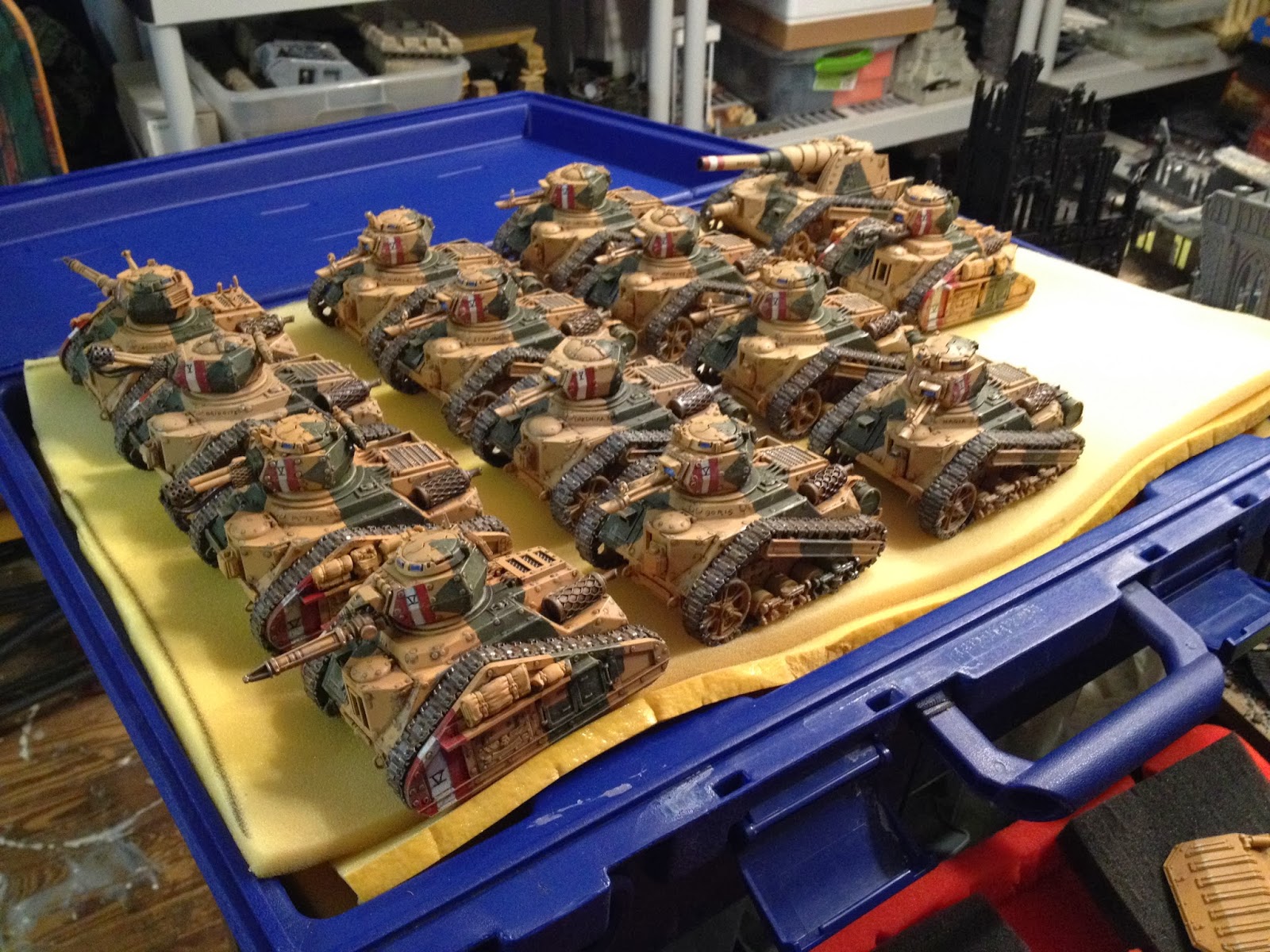 I will be back soon with more! Thank you for checking this out.