Well, A few days ago, I posted about my getting back to the modeling of my zeppelins. Its been one week and I am almost all but done! All of the rivets are in place and just the engine mountings remain. I am used sooo many magnets that I am sure my poor hemoglobin will never be the same again. Today I had spent the better part building the additional weapon mountings I would need if I want to use my "zepps" as Val 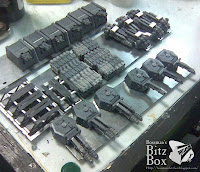 kyries or Vendettas. And since I am making three zeppelins at the same time means I needed to make not 3 twin linked Las Cannons, but 9 pairs! I had been planning for this for some time. I had been trading for IG Las Cannons for months as they came up.

Now that I have my las cannon mountings made, I have pretty much every weapon option I plan on using on my beloved zeppelins. (LC, Twin LC, MLRP, and HBs) I do not plan on using a nose mounted multi-laser (at least at the moment) since v ehicles and transports are almost an automatic in most armies at this point. The LC gives me a better chance to get rid of 'em!

Now the last thing I need to do is make the landing gear for my zeppelins as well. I have modified the doors to open out in a reverse gull wing, I had installed steps on the inside of the doors for the troops to get out of the vehicle as well.
Since the doors open down in this fashion, I need the landing gear to be higher than normal to allow for a reasonable angle for the stairs inset into the doors. So I am modifying the gear to be taller. I will not be installing the gear on the zeppelins (they are inset into the vehicle) I will be building secondary bases for my zeppelins with the landing gear built into the base, and then I will put the zeppelin on the mountings to make it look like it landed and deployed the landing gear. This allows me to still have a base for my vehicle, and its exactly the same size... now to just finish the last item or to and to begin painting all of this in just 10 days =P.